Yesterday started off like any other day. I went for my run. Took a shorter route because I was still feeling tired. Cramped again but not for long. Was extra cautious not to sprain my ankle (I was wary, it being Day 13 and all). Stretched when I returned. Felt good.

On to watch the Jets play the Chargers for the second round of the AFC playoffs. Great game. They really showed up and played their hearts out and next week we’re off to Indiana to hopefully see the same showing against the Colts. Felt great.

Came back to our apartment, had a friend over for dinner. Drank some wine, ate some pasta, played some darts, pretended I knew karate. Wait, what?  Yeah, I really have no business doing any sort of karate and well, I broke my toe. At least I think it’s broken. It hurts and I can’t bend it, so even if it’s not medically broken, it certainly doesn’t work like a toe should work so I’m deeming it broken. How was I feeling at the end of Day 13? Physically, pretty crappy.  Emotionally, super psyched that the Jets won the game.  Mentally, really stupid for thinking I knew karate.  Darn show off. 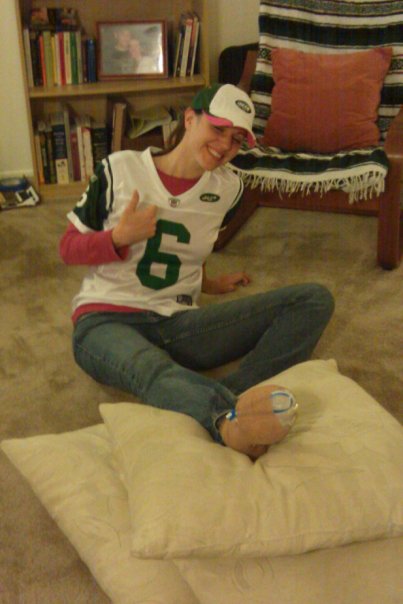 Anyway, now I face the problem of what to do with the rest of this challenge? I can’t do yoga, I certainly can’t run. I can probably ride my bike but it’s suppose to rain all week. (Rain in So. Cal? What’s up with that?) It looks like it’s time to start building some upper body strength. I have a bunch of free weights here so I’ll see what I can get going with them.  I can still do “girl” push-ups and crunches will be fine.  Maybe by Day 30 I’ll be able to do a pull-up.  New goal! One pull up. (lol). I think it’ll be a nice change though I’m terribly distraught that I won’t be running, at least this week.  Anyone know how long it takes for a big toe to heal??