No Room for Baggage

I don’t like packing. Actually I despise it. The idea of planning a week’s worth of wardrobe and cramming it into a a suitcase but making sure not to exceed 50 lbs frightens me.  I never get it right.  Most of the time I end up with way too much stuff and I hardly wear any of it.  But I like to be prepared.  Isn’t that the Boy Scout moto?  Always be prepared!  Well I doubt any Boy Scout thought it would be smart to pack a pair of Aldo shoes just because they’re cute and 5 “summer” scarves because you never know when the temperature will dip and you need to match your outfit.  No.  I think the Boy Scouts had something else in mind.

Well thanks to our backwards economy and greedy corporations (yes I said it!), The All-Star and I will be, get ready for it, SHARING A SUITCASE on our trip to New York.  Ahhh!  The horror!!  Thank goodness it’s summer is all I have to say.  Flip flops and sundresses weigh a whole lot less than sweaters and snow boots.  But really… in an attempt to save a buck, I am finally being forced to pack a little lighter and make due with what I’ve got.

Sounds like a good moto for life doesn’t it?

I’ve been reminded a lot lately that, contrary to popular belief,  it really doesn’t take much to get along in this world. Minimal food, shelter, a few layers of clothing, that’s all I really need.  Yet I’m drawn to the idea of filling my apartment with chachkies that express my longings and throw pillows to express my style. And why?  Stuff is just another thing to pack up and haul the next time we move and probably, eventually throw away anyway.  And whether it be a sore back or a bigger moving truck, it always comes with a price. Just like the extra bag at the airport. I’m not saying I’d rather be living in a dirt floor shack somewhere hunting squirrel and wearing burlap. No, that would be extreme. But maybe, just maybe, I can make due with a little less than society says I need.

I had a friend who used to come camping with me and all he would bring along is a backpack and a sleeping bag.  Meanwhile I’d be lugging all sorts of ridiculous items into the woods. (Remember the Boy Scouts?) I was always jealous of the way he could get-up-and-go with just a few choice belongings and knew he’d survive.  Whenever I pack I’m reminded of him. He didn’t lead by many other examples but that was a good one.

I think my brain has the tendency to bring along a little too much luggage as well. I’m always multi-tasking and worrying, trying to figure things out and answer life’s riddles.  It’s exhausting! And carrying the extra weight of the past and the future can sometimes leave me with little energy left to invest in the present.  But luckily there’s still a little room left for change!

So I say, enough with the extras! It’s time to pack a little lighter, both mentally and physically.  I’m tired of the baggage, there’s no more room for it.  It may take a bit of effort to purge but no need to heave more onto the load. And as far as my trip to NY goes, all I really need are a few positive thoughts, a good pair of shoes and a hat and I’m good.

Okay and maybe one summer scarf! 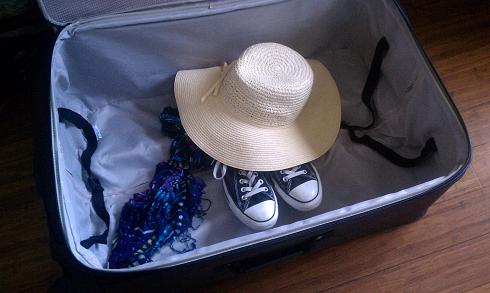 One response to “No Room for Baggage”