Remember the Lesson from the Lizard

Yesterday, while heading out for the afternoon, I also stepped on this little guy. 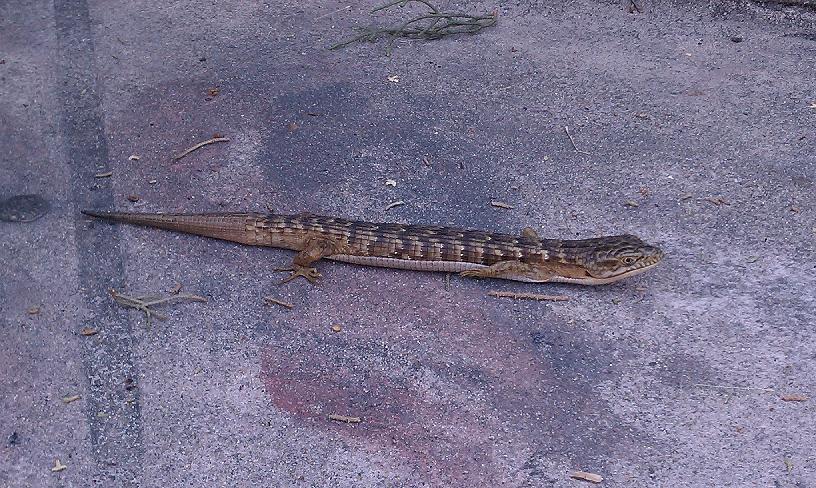 He was just chilling on the steps, not really caring what was going on around him. He didn’t move a muscle while I took his picture. He just followed me curiously with his eyes.

Taking a closer look, it seemed like his tail didn’t quite match the rest of his body. I wondered if this was a replacement tail from one that had been lost. I was reminded of a similar fella I came across almost two years ago. Remember that post? Here’s a repeat in case you missed in… 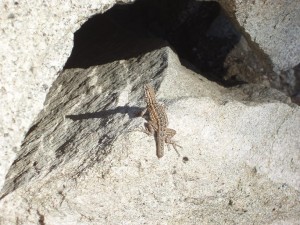 While hiking in the San Bernardino National Forest this weekend, we stumbled upon this little guy.  You’ll notice that he’s missing part of his tail.  We know that most lizards are able to detach from their tails when caught by a predator.  The muscles of the tail easily pull apart and the blood vessels constrict in order to prevent loss of blood. (Talk about fight or flight).

While the tail can grow back in as quickly as three months, the loss of the tail is a loss indeed for the lizard.  The animal stores fat in its tail which is used as a resource for energy.  It is also observed that lizards that lose their tails also lose dominance over their territory.  I’m not sure this guy was worried about all that when he had his lost appendage in the mouth of a crow.

The lizard’s tail is an important part of him being a healthy and happy lizard, but if losing it means that he gets to live another day, he knows he can survive without it.  It may not be the easiest of days but eventually the tail will grow back, sometimes slower than he’d wish or not as brightly colored, but it will indeed return.  When it was in the clutches of a dangerous predator, he did not think.  His instincts instructed his body to let go and run to safety.  Nature installed this mechanism for his benefit.

What is your mechanism for survival??  When you’re caught in a snag, do your instincts kick in and set you free?  Or are you holding on to something that is keeping you from moving forward?  Like the lizard and his tail, we sometimes need to sacrifice in order to continue on our path.  The sacrifice may not be an easy one, (they rarely are), but have faith that you can forge ahead without it and if it’s something that you will once again need, over time it can return.  The important lesson to remember is that you will survive.  Your “tail” is just the extra that’s holding you back.  Let go of the extra!  It won’t mean that you lose everything, just enough for you to safely continue.

Hmmm, I wonder if this something I need to pay attention to. I like to think life works in strange ways like that. I’ve got something to think about…