On Monday, The All-Star accompanied me on my weekly food shop.  I always enjoy when my partner in crime tags along, after-all, he eats the food too, why not get stuff that he wants.  Anyway.  I mentioned that we needed some breakfast foods.  Most mornings we have either eggs, peanut butter and jelly sandwiches, or nothing.  It’s the nothing part that’s been looming over me. After all, breakfast is the most….yea yea yea, we got it. So, I threw it out there, and he immediately grabbed from the hot cereal shelf a box of prepackaged cinnamon and pear oatmeal.  I looked at the ingredients for a second, and then at the price, and said, “We can make this ourselves!” And straight to the bulk foods section we went.

So that box of maybe 6 packets of cinnamon and pear oatmeal was around $4, give or take.  It had dehydrated pears and seasoned rolled oats.  One of those instant, just add water, jobs.  I don’t know about you but I have never been a fan of these little oatmeal packets.  They are always too sweet and the fruit is lame and it’s hardly enough for a hearty breakfast.

I found the rolled oats in the bulk section, $1.29 a lb.  You know how many packages of hot cereal a pound of oats make?  Me neither, but it’s more than 6.  Off to the fruit section.  A 3 lb bag of organic pears for $1.68.  (That’s about 10 pears)  Hi, thank you!  What else do we need?  Cinnamon, have that at home.  Sugar?  We’ll use agave nectar.  It’s sweeter and not as likely to spike our glucose levels.  Alright, we’re ready to make oatmeal!

This morning was the first opportunity I had to make this yummy goodness.  I’ll admit that maybe, just maybe, the prepackaged deal would be a just a tiny bit easier but really, we all have time to cut a pear right?  The end result?  Home-made deliciousness for a fraction of the cost.  It was less sweet than I’d expect the boxed stuff is.  My opinion on that is that if fresh pears and a generous drizzle of pure sweetener doesn’t enlighten my sweet-tooth, then there’s probably way to much sugar-stuff in the processed counterpart.

Delicious!  And home-made with love! 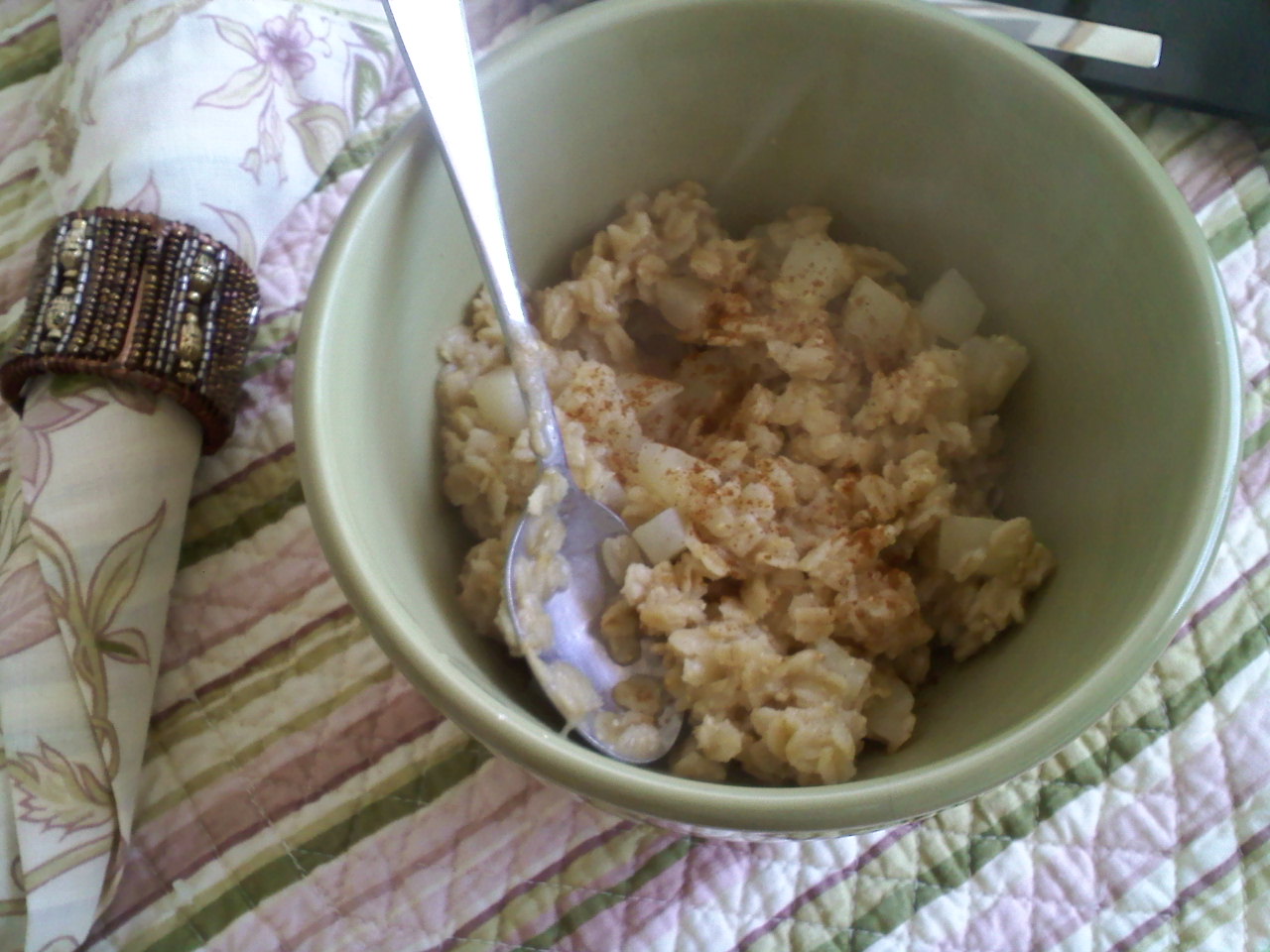 Hi! I'm Laura. A self-employed, wife and mother, striving for greatness but really just trying to enjoy life in this nutty world. I'm not always perfect and neither are my habits, but life is a journey and I'm on a path to wellness