I was always an semi-athletic kid, as were/are my siblings.  Mom signed us up for every sport on the list to help us find our favorite.  She sat on side-lines with the other nutty mothers while I dragged myself through a soccer season (I got hit in the face twice with the ball one week and quickly aimed for a less “unpredictable” sport.)  She was eaten alive by gnats at the park while I piled on the catcher gear for a few summers of softball.  She stomped on the bleachers in the gym for basketball, took me elbow pad shopping for volleyball, and inhaled chlorine fumes at my swim meets.  What a dedicated mom.  I however was not as dedicated a player.

On that faithful day when that darned soccer ball struck my right eye, then later that week again struck my left, the tone was set for a long and grueling career of minor but disheartening sports injuries and I soon abandoned even the idea of sports, my ego smoldered and my confidence in the back of the closet with my water bottle.

Many years followed with me gawking at the idea that sports were the “shiznit.”  In high school and college, athletes were the people who gave up their school-day afternoons and saturdays to sweat on the turf rather than hang out with friends.  Pep rallies and homecomings were for jocks and the geeks who looked up to them.  I was too cool for all that.  That was until cupid stabbed me with his arrow and I found myself in love with one of them.  Dun dun dun dun.

I remember the first time I told my friend I was going to watch him play softball.  She laughed at me and thought I was kidding.  How the heck did hippie Laura end up with a sporter?  What followed was an even greater shock.  I somehow found myself once again a member of the team!  Are pigs flying yet?  Love can do strange things, my friends. 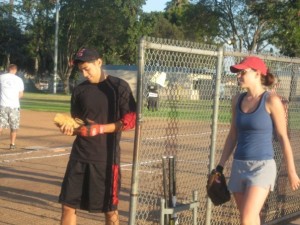 On the day of that first game, all at once the feelings of panic and frustration struck again.  I need to be the best player I can be…oh yeah, AND not get hit by the ball.  Eek!  Heart racing, palms sweating and softball coming at me.  Wake up!  It didn’t take long for me to get the hang of the game.  After a few dropped balls and some bloops to the pitcher, I was on my way.  Then the ego kicked in.  Gosh darn it.

My ego (from now on lets call her Lulu) has a funny way of getting caught up with things that don’t always concern her.  She can be timid and frail and so self-consumed.  Here I am trying to have fun and get my daily dose of elevated heart rate, and she’s letting me think I’m not good enough or fast enough and most certainly won’t catch the ball.  Lulu!  Laura’s trying to be a big girl, go sit on the bench and cheer for me.

What is it about our egos?  Always wanting to get involved and shine, but not always strong enough to deal with the complexity of success.  Colin Powell once said, “Don’t let your ego get too close to your position, so that if your position gets shot down, your ego doesn’t go with it.”  Well last night my position (at third base) was filled with machine gun bullets, and my ego was left bleeding in the dirt right next to it.  There was that same heartache I experienced in grade-school.  I thought that maybe after all these years I could pick myself up and get out there again.  Was I wrong?  Are Lulu’s whines to get involved too loud for me to ignore?  I’m at a loss.

Well, almost.  It’s true, I fell victim Lulu long ago.  She always wanted to be out there playing but could never handle the challenge of failure.  She made me run and hide and seek out forms of expression that I was more naturally good at (or maybe not good at but she somehow didn’t mind).  With all those awesome athletes on the field, running and jumping and making the crowd cheer, she felt we couldn’t compete.  The end result?  What I thought was mockery was really jealousy and what she thought was a safe distance was really cowardly camouflage.

So, today is the day I make a pact with Lulu.  She and I will agree to swallow our pride and get back out on to the field together.  She can sit on my shoulder and tell us how good we’re doing.  She can even chime in quietly if she thinks I messed up.  But no more boo boo’s or she’s outta here!  I’ll eject her so fast she’ll think I was Joe West. 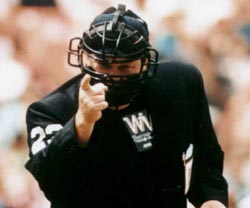 You hear that Lulu.  It’s time wo-man up!  We’re leaving those childhood fears of rejection and stepping up to the plate of reason.  We will not be perfect.  We can never be.  Someone WILL always be better at defense, a faster runner, a stronger hitter, and even a better writer.  It doesn’t matter.  What matters is that I enjoying my life and the time I spend doing things that I know are good for me.  For a long time softball was at the bottom of that list, but I never really wanted it to be.  I enjoy being part of a team and now sharing a field with my all-star boyfriend.  He doesn’t care if I suck at the game.  He’s not a big fan of Lulu though.  Those two still need to spend some time getting to know one another.

Lulu’s a little further behind me on our path to wellness.  She’s starting to pick up the pace a bit but sometimes it takes a little…stroking.  She’ll get there eventually.  We now have an understanding.

So…where are your egos today?  Are they racing over the next pass, calling out for you to come see the view, or has a surprise incline left them huffing and puffing a few meters behind?  If it’s the latter, that’s okay, go give them a helping hand.  We can and should learn to work together with our egos.  I can really be hard on Lulu at times, but she’s not evil, just sometimes naive.  Still, I think she has my best interest in mind.  That being said, I elect today “Stroke Your Ego Day!”  Nothing crazy, just some light petting. Let them know that you think they’re “alright.” They need our support so that they can support us.  That’s the only way we’ll truly succeed, even if it’s just at a sport. 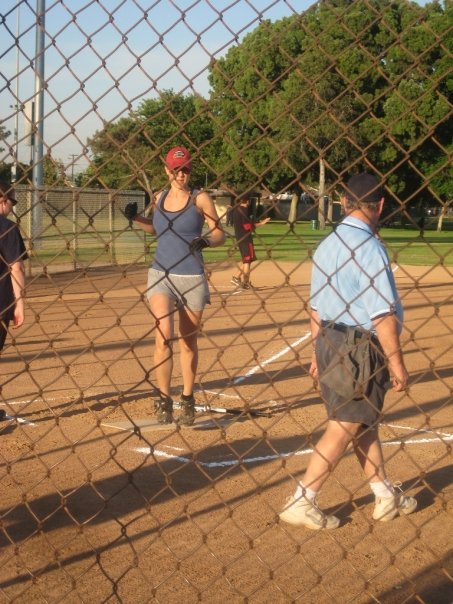 4 thoughts on “For the Love of a Sport…”