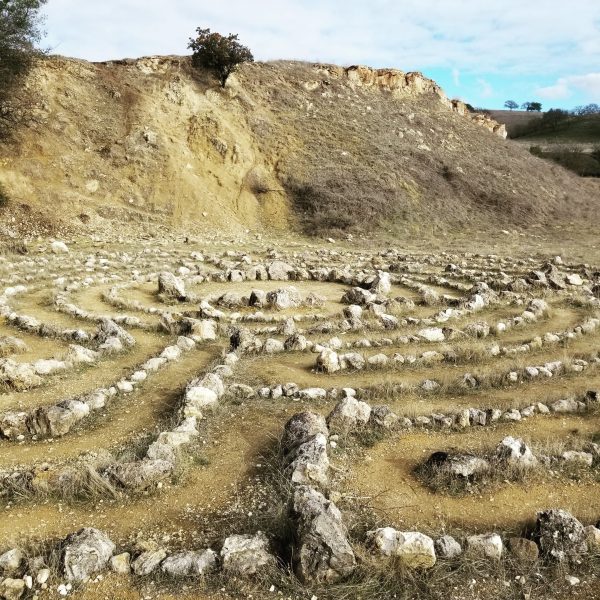 Have you ever walked a labyrinth? Before recently I had never seen one in person, nor had I really gave them much thought. Someone would tell me, “that monastery has a labyrinth.” To which I would reply with what felt like the appropriate answer, “Ooooo.” And that answer was never completely fallacious. I have heard of the spiritual use of labyrinths and I assumed there was something wondrous and mysterious about them. So when I learned that there was one only a short drive from my home, my family and I set off on a hike to find it. The journey, while a bit of a maze itself, was relatively easy, even for our three year old, and quite lovely, much to the joy of my 7 year old. And with a little help from google maps we quickly found our destination.

As I first approached the extraterrestrial-like circle, fashioned from rocks of limestone fallen from the nearby ridges, I was transfixed on the round intricate pattern. With only one way in, I began my walk to the alluring center. I made the decision to walk slowly, silently, and mindfully. I came with no preconceived notion of what I was suppose to do or feel, but being the spiritual seeker that I am, I hoped this meandering path would share some of its infinite wisdom of life’s experience. Or if nothing else, I would feel calmed by the encounter.

While the walk was slow and mindful, it was far from silent. My two young daughters ran circles through the “maze” around me, fearing they would never find the end, shouting for assistance and jumping walls, only to find they were even further from their way out. I kept reminding them to just keep walking. Or in the words a forgetful royal blue tang, “just keep swimming.” The older one quickly understood. She continued her journey, giving me a high five as we occasionally “crossed” paths. The 3-year-old lacked such patience. She yelled that she would be lost forever. Through this all, I continued my own trek and soon understood the illusion she feared.

The irony of a labyrinth is by definition it is a complicated irregular network of passages or paths in which it is difficult to find one’s way. In other words, a maze. At first glance this labyrinth would appear that way too. But a labyrinth created for meditation or ritual is quite different. Though the path may appear confusing at first glance, there is only one way to go. No dead ends, no wrong turns. You simply continue walking forward and you eventually reach the center. There is no thinking involved. No problem solving or memory skills. You just watch your footing and stay the course.

Life goes pretty much the same way, doesn’t it? There are no dead ends. No wrong turns. There is only one beginning and one end, and everything in between is the only way to go. Sure we make mistakes, accidentally (or purposely) jump the path, or turn back out of fear. We move nearer or further from our center depending on where we are on our path, but the end is imminent, so the only choice is to keep moving. The path is the constant in our lives. It is the trajectory from birth to death. From the ideas in our dreams to accomplishing our goals. From where we begin to where we end up. In reality it is quite simple. Human nature of course complicate things. And likely so. Life in terms of our conscious existence appears quite long, much like the long meandering path from the opening of the labyrinth to the center, and it does require much decision making and thought. And how fortunate for us! That this experience of life takes us on so many twists and turns, adding so much depth and meaning. It would take mere seconds to get to the end if you just walked in a straight line. But following the labyrinth lengthens your journey and the journey is where we find our purpose. Our experiences. Our life and all of its gifts. That is the point.

I believe wholeheartedly that the process of achieving our goals, the steps we take towards happiness, the knowledge we acquire as we venture towards mastery, THAT is the value we look back on at the end of our days and say, “YES! I did it!” Sure the successes are important. They are part of what makes the process worth it. But the bread and butter are the experiences we get to live along the way. The relationships we form. The places we see. The art we create. The wellness we cultivate.

No matter where we are on our journey, it’s all still just the same path. It may at times seem like we are so far from our destination and at times we will feel like we can almost touch it. But no matter the distance, we will inevitably reach an end. So move forward thoughtfully. Lean into the experiences, and do it with mindfulness. Not because we have to figure out each step in front of us at every moment, but because life is an adventure. It is the greatest meandering labyrinth.